A Taxing Proposition: A Century of Ballot Box Transportation Planning in Los Angeles 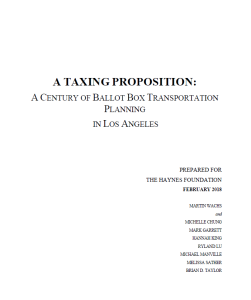 Ballot measures that raise money for transportation through local sales taxes have become startlingly successful across the United States. This is especially true in California, and particularly in Los Angeles County. In November of 2016, more than seven out of ten (71.5%) of those casting ballots approved Measure M which added a half percent to the county sales tax for transportation improvements. The extra half-percent is forecast to raise over $120 billion over the coming 40 years to construct the region’s ambitious new rail transit system and other street and highway improvements. Measure M was the ninth transportation sales tax ballot measure in 40 years to be put before LA County voters, and the fourth to be approved. As a result of voter-approved taxes, LA County today raises well over half of its annual budget for transportation programs through county sales taxes. This report presents an historical analysis of the evolution of and support for local transportation finance in Los Angeles, with a focus on the nine transportation sales tax measures considered since 1968.