Bicycle Crash Risk: How Does it Vary, and Why? 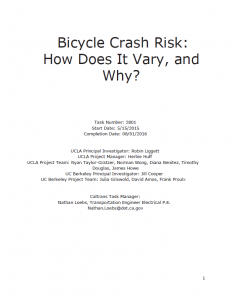 Project: Bicycle Crash Risk: How Does it Vary, and Why?

This research examines how roadway characteristics affect bicycle crash risk. This study models bicycle crash risk at 1,139 locations in the Los Angeles area using 40 explanatory physical and socio-economic variables, including road width, lane configuration, presence of bicycle facilities, income and race. Uniquely, the analysis links bicycle exposure data and crash data directly at all locations. The resulting dataset enables descriptive analysis and statistical modeling of raw crash incidence (count of crashes over a period of time) as well as crash risk (crashes per bicyclist) as a function of the physical and socio-economic variables. The dataset separates crashes that occur at intersections and those that occur on street segments between intersections, to draw conclusions and propose recommendations specific to those distinct roadway locations. For intersections, the following variables are associated with greater crash incidence and greater crash risk: dedicated right turn lanes, classification as a primary roadway, existence of transit stops, high vehicle speeds, and having more than 8 lanes (combined across the two intersecting roadways). For segments, the following variables are associated with greater crash incidence and greater crash risk: roadway widths greater than 62 feet, three travel lanes in each direction, the presence of a dedicated center-turn lane, classification as a truck route, the presence of transit stops in general and rapid transit stops in particular, and vehicle volumes.