A Comparative Analysis of Pedestrian and Bicyclist Safety Around University Campuses 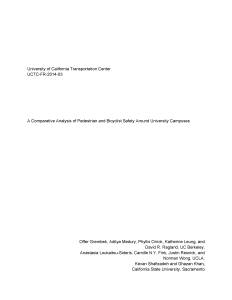 Project: A Comparative Analysis of Pedestrian and Bicyclist Safety Around University Campuses

Large college campuses generate considerable volumes of traffic in a variety of modes, and in greater numbers, than found in most U.S. settings. This setting presents a unique study opportunity, as well as a significant potential for conflicts between motorized and non-motorized users of the transportation system, surrounded as most campuses are by mixed-use environments e.g. retail, restaurant, entertainment and high-density residential facilities such as apartments and dorms. At the same time, university campuses are also typically characterized by a central core area where most trips are made by bicycle or on foot in larger volumes than off campus. This study examines the campus cores and peripheries of the University of California, Berkeley, the University of California, Los Angeles, and California State University, Sacramento, in order to compare safety risks for pedestrians and bicyclists among the three locations. Together, they comprise a wide number of characteristics in terms of setting, size, mode share and layout. The primary goal of the study is to identify possible relationships between pedestrian and bicycle crashes and the environments where these crashes occur, in terms of urban form, traffic characteristics and more. Using approaches from public health, planning, engineering and urban design, crash data (both police-reported and self-reported) and urban form data from all three campuses were examined, and the spatial and temporal distribution of pedestrian and bicycle crashes in each campus were studied. In order to account for under-reporting of pedestrian and bicycle crashes, an online survey was developed to solicit self-reported data from campus travelers about their crash experiences and perceptions about safety. This information was subsequently analyzed to identify collision hotspots reported by travelers on the three campuses, as well as hotspots indicated by reported crash data. The hotspots were studied in detail to identify the characteristics of the built environment that contributed to the incidence of pedestrian and bicycle crashes, and to suggest areas where design changes would be most likely to improve pedestrian and bicycling safety.