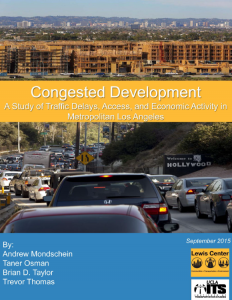 For years Los Angeles has been ranked among the most traffic congested metropolitan areas in the U.S., often the most congested. This past year the Texas Transportation Institute (TTI) ranked LA second only to Washington D.C. in the time drivers spend stuck in traffic. Such estimates are widely accepted by public officials and the media and are frequently used to justify major new transportation infrastructure investments. They are based on the premise that moving more slowly than free-flow speeds wastes time and fuel, and that these time and fuel costs multiplied over many travelers in large urban areas add up to billions of dollars in congestion costs.

But while few among us like driving in heavy traffic, do such measures really capture how congestion and the conditions that give rise to it affect regional economies? This study explores this question for metropolitan Los Angeles by examining how traffic congestion is (i) related to a broader and more conceptually powerful concept of access and (ii) how it affects key industries, which are critical to the performance of the region’s economy.

This research was conducted with generous funding from the John Randolph and Dora Haynes Foundation, and the authors are deeply grateful for the support.