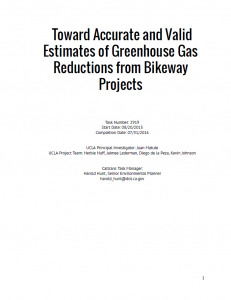 Project: Toward Accurate and Valid Estimates of Greenhouse Gas Reductions from Bikeway Projects

Transportation projects that can demonstrate cost-effective greenhouse gas (GHG) emissions reductions are eligible for targeted funding from growing revenue sources. Chief among these funding sources in is California’s Greenhouse Gas Reduction Fund, established under AB 32.  A growing body of evidence indicates that the provision of bikeway infrastructure is effective in increasing bicycle ridership. The increasing availability performance-based funding for GHG reductions bolsters the importance of providing a method for validly and accurately quantifying GHG emissions impacts of bicycle infrastructure investment.

We seek to model changes in traveler behavior and thus GHG emissions in the wake of bikeway projects. Previous research has estimated reductions in GHG emissions from specific bikeway improvements, but there has been little work that has produced generalizable parameters for estimating GHG emissions reductions from a range of bicycle transportation projects. Concomitantly, there has been little work on how demographics and neighborhood characteristics determine the GHG implications of transportation projects. To hypothesize a few examples: shifting trips from private vehicles to biking has greater reductions in GHG emissions when the local vehicle fleet has lower fuel economy; low-volume bikeways that require substantial infrastructure may not recoup the GHG emissions invested in their construction; and bikeways that connect to high-quality transit may result in larger shifts from private vehicles.

This research advances the state of knowledge by drawing upon fine-grained empirical data for a variety of bicycle projects. It also advances the state of practice: travel demand models that incorporate bicycling are uncommon, and where they do exist around the state, they are in their nascent stages. Our research methods deliberately include counts and surveys in disadvantaged communities, and we seek to discern whether there may be greater propensity to shift modes to bicycling and where such shifts may result in greater reductions of GHGs and criteria pollutants if available vehicles are older or less fuel efficient. We did not find many of the dynamics we hypothesized specific to disadvantaged communities, primarily due to small sample size.

This project produces data and analysis to support the development and validation of models that incorporate demographic data and changes in travel behavior when estimating GHG reductions. These models can form the basis decision-support tools for state agencies allocating bikeway funds, for state decision-makers programming cap and trade funds, and for local agencies who may be implementing climate action plans or simply prioritizing local transportation projects.