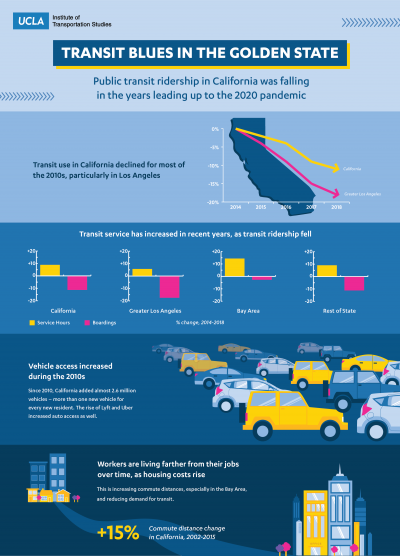 Transit patronage plunged staggeringly, from 50% to as much as 94%, during the first half of 2020 amidst the worst global pandemic in a century. But transit’s troubles in California date much earlier. From 2014 to 2018, California lost more than 165 million annual boardings, a drop of over 11%. This report examines public transit in California in the 2010s and the factors behind its falling ridership.

We find that ridership gains and losses have been asymmetric with respect to location, operators, modes, and transit users. Transit ridership has been on a longer-term decline in regions like Greater Los Angeles and on buses, while ridership losses in the Bay Area are more recent. While overall transit boardings across the state are down since 2014, worrisome underlying trends date back earlier as patronage failed to keep up with population growth. But reduced transit service is not responsible for ridership losses, as falling transit ridership occurred at the same time as operators instead increased their levels of transit service.

What factors help to explain losses in transit ridership? Increased access to automobiles explains much, if not most, of declining transit use. Private vehicle access has increased significantly in California and, outside of the Bay Area, is likely the biggest single cause of falling transit ridership. Additionally, new ride-hail services such as Lyft and Uber allow travelers to purchase automobility one trip at a time and likely serve as a substitute for at least some transit trips. Finally, neighborhoods are changing in ways that do not bode well for public transit. Households are increasingly locating in outlying areas where they experience longer commutes and less transit access to employment. At the same time, a smaller share of high-propensity transit users now live in the state’s most transit-friendly neighborhoods.

While the 2010s proved a difficult decade for public transit in California, and the opening of the current decade has been an even bigger challenge, transit remains an essential public service. Effectively managing transit recovery in California will require a clear-eyed understanding of the substantially altered environment within which these systems large and small must now operate.