Typecasting neighborhoods and travelers: Analyzing the geography of travel behavior among teens and young adults in the U.S. 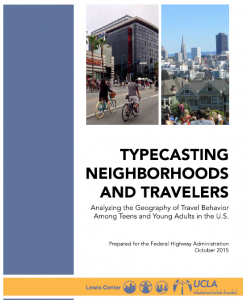 Project: Typecasting neighborhoods and travelers: Analyzing the geography of travel behavior among teens and young adults in the U.S.

Millennials are the talk of the town these days. They have replaced GenXers as the generational darlings of the media – from their collective obsession with mobile communications devices and social media, to their perceived tendencies toward both tolerance and entitlement, to their generally blasé attitudes towards politics, to their enduring infatuation with tattoos – Millennials are seen as distinct in many ways from the generations before them. Among their many traits perceived to be unique is travel.

Although vehicle travel has declined for almost all demographic groups during the 2000s, some of the largest declines have been among young adults. Young travelers have also have experienced a significant decline in licensing rates in comparison with previous generations. What’s behind these trends – be they attitudinal, economic, or technological – has been the subject of much speculation, and the focus of the precursor to this report (Blumenberg et al., 2012). In addition to attitudes, economics, and technology, another explanation for the for the varied travel patterns of Millennials is geographic. Millennials, the story goes, tend to be less enamored of the suburban, auto-oriented lifestyles favored by their parents. Instead of three kids in the backyard, two cars in the garage, and a chicken in every pot, the latest generation of young adults is marrying later, prefers lively cities over staid suburbs, and gets around on foot, by bike, in public transit, and by Lyft and Uber, in addition to driving their own cars. Indeed, data from the U.S. Census show that youth are more likely than older adults to move to central-city neighborhoods where origins and destinations are more proximate and travel by alternative modes (such as by foot, bike, and public transit) is more common. Thus changes in the residential location of young adults today may have important, and potentially long lasting, effects on travel behavior in the years ahead.

In this study, we use individual data from the 2001 and 2009 National Household Travel Surveys and associated neighborhood-level data from the Environmental Protection Agency (EPA) Smart Location Database and the Decennial U.S. Census to examine geographic variation in the travel behavior of youth relative to other age groups. We used these combined data to perform five related, yet distinct analyses: