Two recent publications by UCLA distinguished professor emeritus and ITS faculty fellow Martin Wachs explore a critical question facing the United States: How can we better prioritize and finance our critical transportation projects? 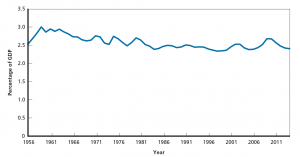 Professor Wachs co-authored “Not Everything Is Broken: The Future of U.S. Transportation and Water Infrastructure Funding and Finance,” recently released by the RAND Corporation. It paints a national spending picture that, while historically steady (see Figure 1), now faces serious problems including declining revenue for the Highway Trust Fund and increased flooding risk in coastal communities.

Wachs highlights the need for the federal government to focus on major investments in renewal of aging infrastructure. In a recent edition of TR News, he explores the first steps in the conceptualization of one such major investments: Replacing the Port Authority Bus Terminal in New York City, the busiest bus terminal in the world.

In the article, Wachs outlines a recent design competition for the overcrowded and deteriorating facility. The competition revealed the complexity and challenges of the project, including the need to accommodate growing ridership while limiting construction impacts on the surrounding community. His research into these kinds of transportation challenges offers a framework for how policymakers and planners can move forward.

TR News is a copyright of the National Academy of Sciences, Engineering, and Medicine; the article is posted with the permission of the Transportation Research Board.