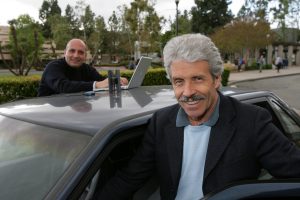 Professor Mario Gerla MS ’70, PhD ’73, a pioneer in computer networks who had supervised more than 100 PhD graduates and served as chair of computer science at the UCLA Samueli School of Engineering during his long career, died on Feb. 9 after a prolonged battle with pancreatic cancer. He was 75 years old.

Gerla was also affiliated faculty with the UCLA Institute of Transportation Studies because of his research interests in vehicular networks, such as car-to-car communications networks and urban sensing, and traffic management for congestion and pollution mitigation.

“Over the past few years, Professor Gerla collaborated with transportation scholars across the UCLA campus and around the world on a number of innovative projects,” said Brian Taylor, ITS director and professor of urban planning at UCLA Luskin. “He was a warm and generous colleague, an exceptional scholar, and he will be deeply missed.”

Gerla was born in Arona, Italy, in 1943 and grew up in Milan. He received an engineering degree from the Politecnico di Milano in 1966 and completed service in the Italian Navy following graduation. In 1969, he moved to the United States to join the UCLA research team—led by his advisor Leonard Kleinrock—that was developing the ARPANET, the predecessor to today’s internet.

After earning his doctorate, Gerla became a manager at the Network Analysis Corporation in Glen Cove, N.Y., where he was involved in several computer network design projects for both government and industry.

Gerla returned to UCLA in 1977 to join the computer science faculty, where he would remain until his passing. He was the director of the Center for Autonomous Intelligent Networks, and of the Network Research Lab. He led research focused on the design, performance evaluation, and control of distributed computer communication systems and networks. His early work focused on optimizing what would eventually evolve into the internet.

His later work in the field of mobile ad hoc networks was recognized with his election to Fellow of IEEE and the Association for Computing Machinery, and with the SIGMOBILE Outstanding Contribution Award. Two major international communications conferences, INFOCOM and MILCOM, honored Gerla with lifetime achievement awards.

From 2015 to 2018, Gerla was the chair of the Computer Science Department. In 2015, Gerla was appointed to hold UCLA’s Jonathan B. Postel Chair in Networking, an honor reserved for scholars who have made significant contributions to internet research.

Although he left Italy nearly 50 years ago, he always maintained a close connection with his family and research colleagues in his homeland. He helped to found the Italian Scientists and Scholars of North America Foundation (ISSNAF) and was honored with the Officer of the Italian Republic Order of Merit.

Gerla was a marathoner, triathlete and member of the UCLA Masters Swim Club. He was also an ardent traveler who was proud to have visited all seven continents and swum in six of seven seas during his lifetime.

He is survived by his wife, Maggi, his daughters, Marisa and Cristina, and his siblings, Emma, Silvia and Franco.

A celebration of Gerla’s life will be held March 23 at 11:00 a.m. at the UCLA Samueli School of Engineering, located at 404 Westwood Plaza Engineering VI – First Floor, Mong Learning Center, followed by a reception. All are welcome to join and those interested in attending should fill out this form to receive further memorial details as they become available.

In lieu of flowers, donations can be made to support the Mario Gerla Scholarship in Computer Science at UCLA to enhance the diversity of students and scholars in the field of computer science.