Jacob Wasserman MURP ‘19, who currently works as a research project manager for UCLA Institute of Transportation Studies, won the Neville A. Parker Award for his capstone project, “A Time and Place for Every Rider? Geographic and Temporal Changes in Bay Area Transit Ridership.”

The award is given annually by the Council of University Transportation Centers (CUTC) to two recipients for the best master’s project in either policy and planning, or science and technology. Since 2002, a UCLA student has won it nine times.

The project explores how, where, and when ridership changed in the nine-county Metropolitan Transportation Commission region over the past decade. Wasserman found three major trends in Bay Area ridership: gains at certain agencies masked declines in others, the largest operators suffered from peaking problems, and jobs and concentrated employment help explain the variation in ridership across agencies.

“Jacob’s award-winning research continues a long legacy of outstanding student work produced in tandem with ITS,” said Brian D. Taylor, professor of urban planning and public policy at the UCLA Luskin School of Public Affairs and the director of UCLA ITS. “His meticulous, detailed analysis sheds light on the waxing role of employment concentrations in shaping transit use on BART and in the San Francisco Bay Area. We are thrilled that, after graduating, Jacob has joined us at ITS and will bring his superb analytical skills to the work of our institute in the months and years ahead.”

Wasserman received the award at the CUTC Awards Banquet Jan. 11 in Washington D.C. 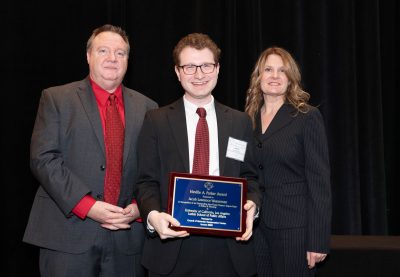