TransportationCamp in LA: What an amazing, exhilarating day. 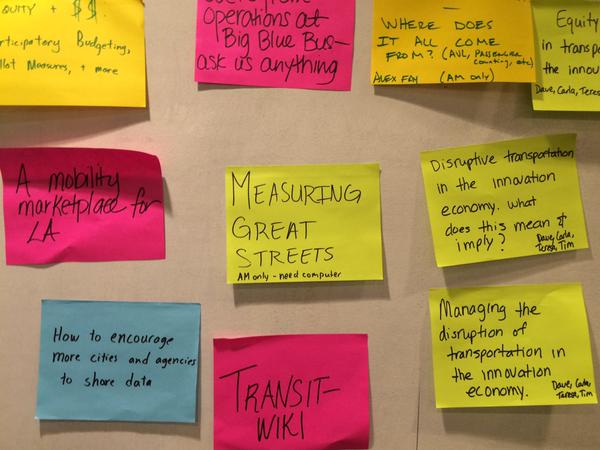 On Saturday October 3rd, UCLA’s Institute of Transportation Studies brought together over 120 people, including Advisory Board members Joshua Schank and Peter Marx, to talk about topics in transportation and technology at TransportationCampLA at UCLA Luskin yesterday.

Learn more about this great day after the jump.

TransportationCamp is different from other conferences we organize: It’s an unconference. Topics are proposed by participants on the day of the event, and organizers plot together a day’s worth of sessions within the span of just under 30 minutes. Some attendees prepared slides in advance, while others led discussions and brainstorming sessions.

We at UCLA ITS booked the space, organized registration and ordered the food. Everything else – the scintillating conversations, the networking, and the information sharing – was brought to the table by all of you in attendance. Yesterday’s success would not have been possible without everyone’s participation, and without the leadership of those who proposed and led sessions (all 22 of them).  Thank you.

Below, we share what our highlights, but don’t take our word for it: Check out the hackpads completed by our gracious camp counselors (volunteers) and search for the hashtag #transpocampLA on Twitter and Instagram. Opt-in to connect with other participants here.

Check out all these cool panel ideas! Where should we go first? #TranspoCampLA pic.twitter.com/NfNp9Ffq0L

And onto the sessions:

Every parking spot is a potential home. #transpocampla

Morning session of #transpocampLA was amazing- thanks to everyone who came to our session on Disruptive Transportation & Innovation Economy!

Hank Fung, an engineer, pulled together a session to talk about how planners and engineers can work together.

“Engineers must give the stamp of safety and assume liability. Makes profession risk-averse and by the book.” #transpocampla

Serious knowledge being dropped by engineers: “planners call a meeting to present a solution. We need time to digest it..” #transpocampla

And check out this very meta photo/tweet:

What did you enjoy about the day? Do you think we should do this again? Lets’ keep the conversation going on the hackpad: transpocampla.hackpad.com.