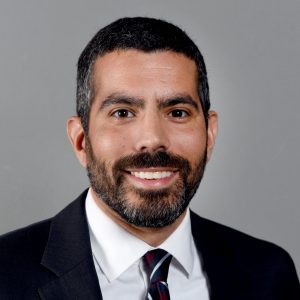 For the next year, the UCLA Institute of Transportation Studies will benefit from the research and expertise of a climate adaptation specialist.

Mikhail Chester, an associate professor of civil engineering at Arizona State University, has joined the institute as a visiting scholar, focusing his yearlong appointment on studying infrastructure vulnerabilities in a changing environment.

“Roads are not designed for the worsening conditions of climate change,” Chester said.

The old, conventional thinking about this problem was to map the hazards: Where will it be hotter? Where will it flood? Where do the roads and bridges intersect?

“Infrastructure are not fragile, brittle things. They’re tough,” he said. “What I’ve been trying to do is shine a light on how we can think more critically about what ‘vulnerability’ means.”

Specifically, while at UCLA, Chester will study how roads are vulnerable to wildfires.

Last year, California experienced its largest and deadliest wildfire season. And despite a wet winter, the state is again braced for an active wildfire season spurred by rising heat and driven by winds.

In recent years, Californians have seen wildfires burn near, and eventually cross, freeways.

And yet, “for the most part, the asphalt is OK,” Chester said. “It turns out the biggest danger to roads is after the wildfire.”

A fire will burn up vegetation, creating ground debris. It’ll also shift the soil chemistry, making it less likely to absorb water. The two can combine to disastrous effects following heavy rains. In what has become a routine post-wildfire concern, rocks, mud and other debris flow down hillsides left barren from recent fires and wreak havoc on roadways and other infrastructure.

While at UCLA, Chester ― who hopes to engage with professionals across multiple campus disciplines, such as urban planning, engineering, climate science and public health ― plans to connect the state’s fire forecasts and transportation infrastructure with various environmental indicators, like terrain, vegetation and soil characteristics.

“When you connect the dots and put all these things together, ideally, you come up with a better way of characterizing vulnerability,” Chester said.

Once the risks are identified, local officials and policymakers can draft an array of responses ranging from strengthening infrastructure and managing forests to detouring traffic away from vulnerable roadways.

A civil engineer with a public policy background, Chester is a leading researcher on the interface between infrastructure and urbanization. His work on the environmental impact of transportation looks beyond tailpipe emissions to assess the role of roads, fuel supply chains and manufacturing.

In Arizona, with high temperatures and flash flooding, he’s explored climate adaptation and resilience. He’s also currently involved in an interdisciplinary study with UCLA on the sun and heat exposure a person experiences in their day-to-day travels.

All of this work, as Chester explains, is the groundwork for a larger question: How will we manage infrastructure for the next 100 years?

The world is rapidly changing and new technology constantly emerging. People will continue to demand more from an infrastructure that is rigid and not designed to quickly and efficiently accommodate these changes like, perhaps, autonomous vehicles.

“I think we are woefully unprepared for how we manage infrastructure or how we think about the problem,” said Chester, who has been laying out issues about how to reimagine these concepts for the 21st century and beyond.

“We are so stuck with the status quo that I’m worried whether or not we can make substantive change fast enough. I think as infrastructure professionals ― planners and engineers ― if we can’t recognize issues and make changes, we’re going to be irrelevant.”